Title: Rise of the Red Harbinger 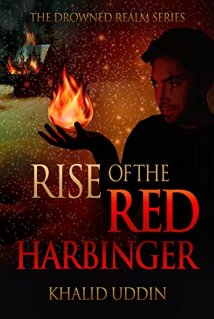 There’s a description of a weird hat worn by a minor character.  Anticipating the reader’s questions about why the character wears this hat and why the narrator takes the time to describe it, the wearer  explains to his visitor, “Dear boy, you try leading around a Blind Man while also carrying his lunch and his books as well.”  The reader learns that the hat is not just an exotic prop; its strange appearance is essential to its function and its function is essential to the culture of Ashur, the detailed world Uddin has built in Rise of the Red Harbinger.  Uddin uses the physical and cultural landscape of Ashur to weave an intricate story with the sweep of an epic and the intimacy of a character piece.  This is a thinking person’s sword and sorcery adventure in the tradition of George R.R. Martin and Patrick Rothfuss.  Fans of the mature, darker Harry Potter installments will also find a home here.  Sprinkled throughout, Uddin has planted fun, metafictional Easter eggs of pop culture and its fandoms.  My personal favorite is when a character exclaims, “One does not simply walk into the Anonymi fortress.”  Through multiple, third-person-limited narrators, the novel takes the reader on a whirlwind tour of Ashur that brims with regional accents and distinct, mouth-watering cuisines along with a range of religious beliefs and names of places and of people that are just familiar enough to be accessible, but exotic enough to let readers know they’re not in Kansas anymore.  Each chapter begins with a poetic quote from the “Book of Origin,” Ashur’s holy scripture, that sets the thematic tone for the action that follows.  But characters often take time out from dodging dangerous beasts and attacking each other with swords and magic to discuss Ashurian ideas about political power, race, religion, gender, sexual orientation, even education.  The effect is a funhouse mirror of a holiday table argument, except that Uddin is smarter and more entertaining  than your drunk uncle.

Baltzar and Boaz are twins who live in a remote village, but their simple life is shattered and they find themselves separated on different roads.  A Shakespearian case of mistaken identity leads to unforeseen hardships since only one of the twins is needed for a powerful supernatural ability he does not even know he possesses, but that he must somehow learn to control.  And one twin ends up with his brother’s unwitting ex-girlfriend.  As they travel their separate ways, each must confront the truth about himself, their past and the dangerous forces moving through Ashur.

Tonio Favetta is the author of Falling From the Ground, a Y/A SciFi adventure. He also teaches high school English.

Posted in Book Reviews and Recommendations